If you want a super quick answer then here are a few points and diagrams so you get the take home message.

What are the Pros and Cons?

The main difference between a floating a fixed bridge is the tremolo arm. With a floating bridge, you can use this arm to add a vibrato effect to your playing, but you can’t do this with a fixed bridge.

However, floating bridges come with some drawbacks. They’re hard to setup and repair, they can also limit tuning stability and perhaps most importantly, they make string changing a more difficult process.

There are also a few different types of fixed and floating bridges which each have their own pros and cons. Keep reading to find out more about each bridge type. 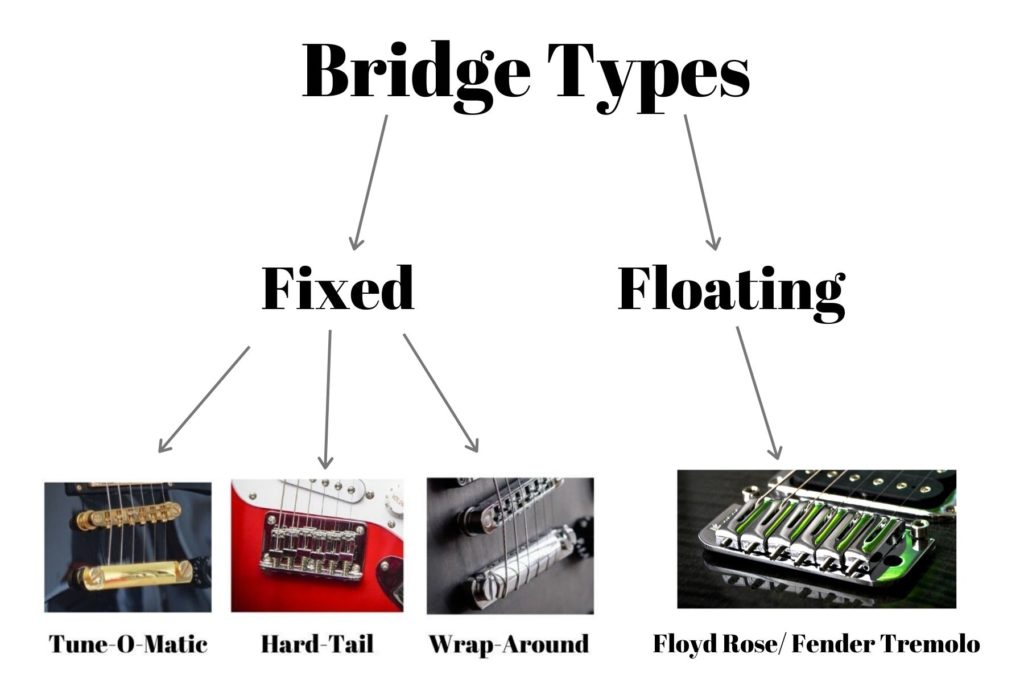 What is a Fixed Bridge?

A fixed bridge is also known as a hardtail bridge. This is when the bridge is screwed down to the body of the guitar, and there are six adjustable saddles which fit each string. It’s the most simple kind of guitar bridge and it’s very easy to manage and adjust.

Which Guitars use fixed bridges

Many different kinds of guitars use fixed bridges. The most famous ones as the Gibson Les Paul and the Fender Telecaster. Some Fender Strats also use the hardtail bridge, but some also use the floating bridge.

There are several different types of fixed bridges, which can often cause confusion. So here’s a quick rundown of the most common fixed bridges and how they differ from each other.

What is a Floating Bridge?

Floating bridges are also known as tremolo bridges. They do what fixed bridges, in that they provide an end-point for the strings on the guitar’s body, but they also have an additional function that fixed bridges can’t do.

Floating bridges allow you to use a tremolo which means you can change the pitch of the strings once they’ve been plucked by moving the tremolo arm up or down. This is known as vibrato.

Which Guitars Use Floating Bridges

The Fender Stratocaster is well known for having a floating bridge, however many other brands also use them. For example, a lot of PRS guitars have a tremolo bridge. Floating bridges are popular with heavy rock and metal music, so manufacturers like Ibanez and Jackson also use floating bridges often.

There are a few different types of floating bridges, but two are very common, the Fender Tremolo and the Floyd Rose Floating Bridge.

Which Bridge Type is Best?

Now you know a bit more about the floating and fixed bridges and their sub-types, it’s time to compare them head to head. I’ll start by saying that there is no real answer to which bridge is best, it’s all personal preference and depends what you value most. So let’s go through the main differences:

The main difference between the sound of a floating and fixed bridge, is due to the tremolo arm. Using the word “tremolo” can be a little confusing. You see, tremolo refers to variations in volume. But that’s not what the tremolo arm does. Instead, it causes variations in pitch, aka, vibrato.

So in summary, if you want to be able to use a tremolo arm to add this vibrato effect, then you want a floating bridge as you can’t do this with a fixed bridge.

This means that changing the strings can be a bit of a nightmare with floating bridges if you’re a beginner.

Another disadvantage of floating bridges, is that it makes the tuning stability of the guitar weaker, so it’s likely to go out of tune faster.

This is more of an issue with Fender Tremolos than with Floyd Rose Bridges, as the double locking system on the latter prevents the guitar going out of tune as much. However, it’s hard to do big bends on the tremolo arm without having tuning stability issues.

One of the other issues with the floating bridge is that they take a lot more setting up and maintenance than fixed bridges.

Floating bridges contain springs that need carefully balancing which fixed bridges do not require. If the balance is not correct, then you’ll definitely get tuning issues, even if you’re not using the tremolo arm.

It can also be a nightmare if you need to change a string quickly. You can’t just restring one string simply like you can with a fixed bridge. You’ll need to make sure the bridge is balanced again and make adjustments to the springs.

So to round things off, deciding on which type of bridge is best for you, depends on two things.

If the answer to both those questions is yes, then go for the floating bridge. But if your answer is no, then the fixed bridge is the one for you!

So there you go! That’s the difference between a floating and fixed bridge! I hope you’ve found this article helpful, thanks for reading, and have fun shopping for a new guitar or amp! Here are some other posts you might find useful:

link to Vox Amp Settings and Controls: A Complete Guide

Vox are well known for their top-of-the-range valve (tube) amplifiers. In this article, I'll take you through the main controls and what they do, the built-in settings on the most popular Vox amp...

If you're looking to upgrade your guitar, or are a complete beginner choosing your very first guitar, then you you'll be wondering which is best for you, a standard electric guitar or an...