If you’re like most players that have never used a 7 or 8 string guitar before, then they probably seem like a bit of a mystery. Sure, you may have seen some guitarists use them, and they look pretty cool. But what actually is the point in having 7 or 8 strings?

The main disadvantages of having the extra string or two, are that it makes them more difficult to play on, and there are fewer tabs available, so you’ll need more knowledge of music theory to get the most out of them.

Difference Between 6, 7 and 8 String Guitars

Okay, so probably the best way to understand exactly why some players use 7 and 8 string guitars, is to discuss what actually makes them different from their 6 string counterparts, besides the obvious.

There are several features that having and extra string or two affects. These include: the tuning, nut width, scale length, neck profile, and the frets. I’ll go through each of these individually now.

Okay, so the most obvious difference between having 6, 7, 8 strings on your guitar, is the tuning. On 7 and 8 string guitars, you have the capability of playing more notes, than you would on a 6 string guitar. This is because the 7th and 8th strings are tuned differently.

Having these extra strings allows you to play lower notes than you would be able to on a 6 string guitar in standard tuning. This is good if you want to play using very low notes, that a 6 string in drop tuning can’t normally handle.

It’s quite difficult to drop tune a 6 string to drop C or drop B without running into intonation problems. Having the extra bass strings on a 7 or 8 string guitars, allows you to play these extra notes, and the longer scale length prevents intonation problems.

One of the biggest differences between 6, 7 and 8 string guitars, besides having an extra string or two, is the scale length. This is the distance between the start of the headstock, and the bridge of the guitar.

Whereas 7 and 8 string guitars typically have a scale length of 27 inches an above. This definitely affects playability. It will cause your arm to have to stretch farther to play lower notes on the fret board, which some players can find quite uncomfortable.

To compensate for the extra strings, 7 and 8 string guitars usually have a larger nut width than 6 string guitars. Otherwise, the strings would be too close together, making it difficult to fret individual strings.

A larger nut width, means a wider fret board. Some players can find it difficult to play on these wider neck widths, as your fingers will have to stretch farther to reach the lower notes. This is usually more of an issue when stood up than sat down.

This compensates for having a wider fretboard. Having a more shallow neck profile makes it faster to play on, so makes it easier to shred and play quick riffs and power chords. So players prefer this flatter neck radius, but others find that it feels and bit weak and thin. It’s all personal preference when it comes to playability.

You’ll also notice that the frets look a bit different on 7 and 8 string guitars. Typically you’ll find that the frets are wider, and sometimes fanned.

The fanned frets allow you to reduce the tension of the higher strings, and put greater tension on the lower strings. This does two things. 1. It makes it easier to bend higher strings. 2. It gives the low strings a deeper and fuller sound. 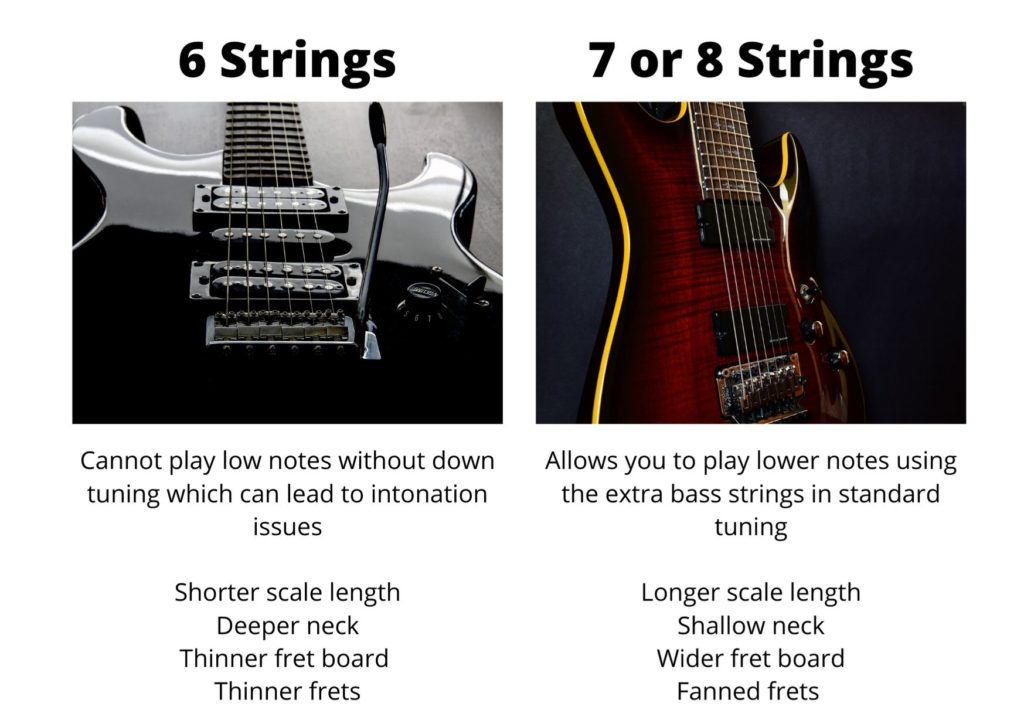 Are 7 and 8 String Guitars Harder to Play?

So one of the biggest questions guitarists have about 7 and 8 strings, is centred around playability. Of course, the sound of a guitar is super important, but if it’s a nightmare to play on, then it’ll end up sounding pretty terrible anyway.

This is typically why you won’t see beginners, or even intermediate guitarists sporting a 7 or 8 string guitar.

So now you know a bit more about the difference between 6, 7 and 8 strings, let’s move onto the pros and cons of having those extra strings.

Pros of 7 and 8 string guitars

cons of 7 and 8 string guitars

So if you’ve decided that you’re interested in having the extra string or two, than you’re probably wondering whether you should go all out and get an 8 string guitar, or just stick with 7.

It’s usually easier for players who are used to 6 string guitars, to transition to a 7 string rather than jump straight to 8 strings. This is because you’ll find them easier to play on, there are more tabs available, and it’s easier to get used to having the extra string and learning what to do with it.

The only reason you would need 8 strings, is if you’re really after that extra range. This is usually only necessary if you are writing your own songs, as it can be great fun to design riffs that incorporate that 8th string. However, the majority of players will do just fine with 7 strings.

Who Plays 7 and 8 String Guitars?

Okay, so who actually plays 7 and 8 string guitars? There aren’t too many players that use them, and most are from the metal scene. Here’s a quick list of some of the most famous guitarists that have been seen playing with 7 and 8 strings.

Which Brands Make 7 and 8 String Guitars?

Usually, the metal guitar manufacturers are the ones that you’ll see making 7 and 8 string guitars. Here are some of the most well known brands.

Ibanez are a huge electric guitar brand that manufacture models for a range of different styles, but they’re probably best known for producing guitars geared for metal players. They’re probably best known for their RG series and JEM series which are played by loads of pro guitarists. They manufacture models for all price points, from entry-level, to custom shop.

This is another highly-regarded metal guitar manufacturer that produces primarily mid-high end electric guitars. Their most recognised model is the Hellraiser which comes in 6, 7 and 8 string variations with a long scale-length, jumbo frets and loaded EMG pickups.

Jackson guitars are well known for being amazing for metal. The entire brand is geared towards metal guitarists, so it’s no surprise they produce some of the best models out there. The Soloist and Dinky are two very well known metal guitars, that cater to a range of different price points.

Don’t worry if you still have some more questions about the extra string or two. Here are some of the most frequently asked questions about seven and eight string guitars.

do you need play chords differently on 7 and 8 string guitars?

Yes, because you have an extra lower string, you’ll need to play open chords in different positions to get them to sound right. It depends on the chord, but there are plenty of resources out there that will shown you the correct positioning.

Power chords are less complicated though. If you use standard tuning, you’ll be able to play the power chords normally, by muting the 7th or 8th string. You can also utilise these strings to allow you to play your power chords differently.

what are 7 and 8 string guitars commonly used for?

Seven and eight string guitars are most frequently used for metal. This is because a lot of metal guitars play lower notes than you can play using standard tuning on a 6 string guitar. Having the extra lower strings, allows you to play this lower notes, without down tuning, so you’re still able to use higher notes on the rest of the strings.

So there you go! That’s everything you should know about 7 and 8 string electric guitars! I hope you’ve found this article helpful, thanks for reading. Here are some other posts you might find useful: