If you’re after a beginner’s guitar, then you’ve probably heard a lot about the Stratocaster and Telecaster.

They’re two of the most iconic electric guitars ever produced and have a great reputation. There’s a huge range of different models to suit every budget, from the premium Fender models to the more affordable Squier brand.

But which is actually the best electric guitar for a beginner?

In this post, I’ll go through all the similarities and differences between the Stratocaster and Telecaster. This in depth comparison will also address the bih question, which should you choose for your first guitar.

Here’s a really quick rundown of the main features of each electric guitar.

Here are links to entry-level Stratocaster and Telecaster guitars so you can compare prices:

Both guitars have single coil pickups which produce that bright and twangy sound that you associate with Strats and Teles. The main difference in tone is due to the addition of a pickup in the middle of the Strat. This three pickup configuration, plus the extra tone control gives you added versatility.

The classic Stratocaster also has a tremolo bridge which allows you to add a vibrato effect to your playing, without requiring the addition of an effects pedal. The Tele has a fixed bridge so will not give you this effect.

Both guitars have an iconic look. The Strat has a double cutaway design, whereas the Tele has one single cutaway. The Strat is also contoured and curved, unlike the Tele which has a very flat body.

Both guitars have the same number of frets, and scale length. You also get pretty similar colour options with each, and the addition of a pickguard.

The Telecaster and Stratocaster vary most in terms of how they feel. The Tele’s flatter body can sometimes feel less comfortable compared to the contours on the Strat. The Strat also tends to have slightly thinner neck compared to the Tele which beginners often prefer.

In terms of similarities, both guitars weight roughly the same  and have the same scale length, although the Strat is longer when you take into account  the headstock.

Which is Best for a Beginner?

When it comes to deciding which guitar is best, it is all down to personal preference, so I’d always say the best thing to do is to try both guitars, and see which one you prefer.

However, in my opinion, I think the Stratocaster is probably more suitable for most beginners for the following reasons.

Even with that said though, there are plenty of reasons why you may still prefer the Telecaster, even if you’re a complete beginner. So make sure you try both and see which you prefer.

Now we’ve been through a quick comparison between the two electric guitars, I’ll run through the main features of each in more detail.

The body shapes of the Tele and Strat vary quite significantly, and this impacts the look, but also the feel of the guitar and how easy they are to play.

The Telecaster on the other hand, has a single cutaway design and a flat body without any contouring. This makes it a bit harder to reach the top frets of the guitar, and it can be a little uncomfortable to hold for a long time. Although, some players, no matter their experience, can prefer the feel of the Tele compared to the Strat.

Most Teles and Strats have an alder or ash body on premium Fender models, and a cheaper Poplar body on more affordable Squier models.

There are a number of similarities and differences between the necks of Telecasters and Stratocasters which affect how they play, and hence how good they are for a first guitar. Keep in mind though, that individual models can vary, this is just a comparison between the standard features.

We’ll start with the similarities. Both guitars have a 25.52 scale which is pretty large, especially compared to other big guitar models like the Gibson Les Paul and PRS Custom 24. Both guitars also have 22 frets and usually a bolt-on neck construction. They also usually have maple necks.

The main difference between the necks, is in the shape and profile. Strat necks are usually C-shape, which is the most common electric guitar neck profile. Tele necks are classically U-shaped. This means they’re thicker. Hence, for beginners the Strat neck is usually better as it’s less of a handful so makes it easier to hold chords, bend strings and move faster around the fret board.

Both electric guitars have single coil pickups. You can get some guitars which have humbuckers instead, but the standard models have only single coils.

This means you get a twangy, bright tone that’s well suited to clean or low-gain amp settings. If you crank the gain up, you can start to get some humming background noise. Check out this post on the main pickup types to learn more.

The main difference is, that you get 3 pickups with the Strat, and 2 with the Tele. This different pickup configuration changes the number of different tones you can achieve. With 3 pickups, you can get 5 possible tones, but with 2 pickups, then you can only get 3 possible tones.

If you don’t know much about this topic and want to learn more, then check out this pickup configuration 101.

Another difference is that you get two tone pots with Strat, and only one with a Tele. Having more tone pots (aka controls or knobs), gives you more options when it comes to dialing in the perfect tone.

For some beginners, this isn’t really necessary and can be an over-complication. But other newer players prefer having more variety and versatility.

One of the most notable differences between the Strat and Tele, is the bridge type. Telecasters have a fixed bridge, and Stratocasters have a floating bridge.

The Strat’s bridge allows you to use a tremolo arm to add a vibrato effect to your playing, without using an effects pedal. But the Tele does not have this option.

The tremolo arm on the Strat is great for adding an extra effect to your playing, but it’s not completely necessary, especially for a beginner. It can be difficult to setup, keep in tune, and change the strings. So sometimes this can add unnecessary complication, and some beginners may prefer the more fuss-free Telecaster bridge.

Check out this comparison between fixed and floating bridges to find more out about this topic.

Now we’ve been through all the key features, let’s talk about the different options and prices.

The original manufacturer of both the Telecaster and Stratocaster, is Fender. This is a brand with an iconic and rich history. They produce very high-quality premium instruments, but also have some lower end models. Generally the low-end Fender guitars cost around $700 and the top end models cost several thousand.

If you want a more affordable beginner’s electric guitar, then you’re best off going for a Squier brand guitar. The company Squier is owned by Fender and produces much more affordable guitars starting from around $130.

There are also many different guitars in the Squier and Fender range. Here’s a quick rundown of each series ranging from least to most expensive.

If you’re interested in purchasing a Squier or Fender Stratocaster or Telecaster, the check out Guitar Center for some great deals.

Here are links to entry-level Stratocaster and Telecaster guitars so you can compare prices:

This has been a pretty big article, so I thought it’d be best to summarise everything and keep things super clear. So this brings us back the original question. Which is best for a beginner, the Strat or the Tele.

In my opinion, the Strat is easier for most beginners to play on. My first guitar was a Squier Stratocaster, and I found it really great to learn on. The three pickups and two tone controls gives you plenty of versatility, the body is contoured and the double cutaway increases playabilty.

That doesn’t mean that the Telecaster isn’t the best option for you though. Check out both guitars in the store to see which one you prefer in terms of the sound, feel and looks. It all depends what’s important and feels best to you. Here’s a quick picture to sum up the pros and cons of each guitar. 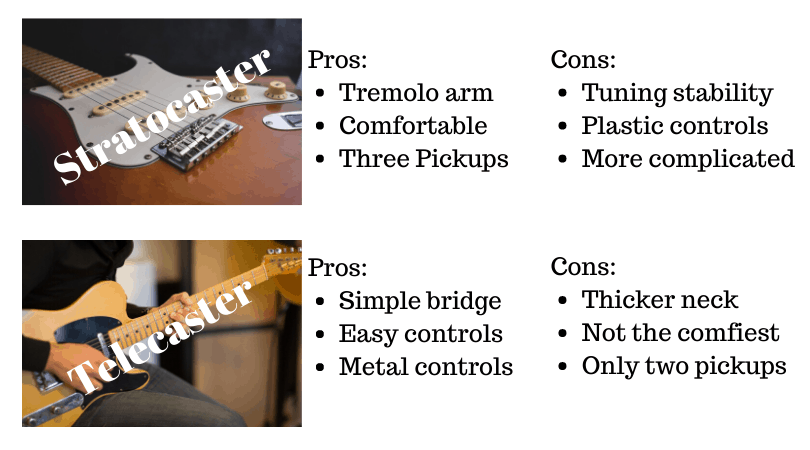 So there you go! There’s the in-depth comparison between Stratocasters and Telecasters for beginners! I hope you’ve found this article helpful, thanks for reading. Here are some other posts you might find useful: