If you’re looking for a new guitar, then you’ll definitely have heard about the PRS Custom 24 and the Fender Telecaster. Both are brilliant guitars that sound and look great. The Fender Tele has a rich history and is the electric guitar of choice for loads of pros. The PRS Custom 24 burst onto the scene later in the game, but has since got a stellar reputation for its quality and value for money.

But which is best?

In this post, I’ll go through all the similarities and differences between the PRS Custom 24 and Fender Telecaster so you can decide which is best for you. So let’s get started!

If you’re just interested in the specs, then check out the table below to compare all the key features between the standard versions of the Fender Telecaster and PRS Custom 24 .

The Fender Tele and PRS Custom 24 are very different sounding from one another. This is mainly due to the pickups. The PRS uses two humbuckers which produce a warmer, darker sound than the two single coil pickups on the Telecaster which sound crisper and twangier. The PRS does have a coil split function as well, allowing you to achieve similar tones to a single coil pickup, in addition to the classic humbucker tones.

Another key difference that affects the sound is due to the bridge type. The Fender Telecaster has a fixed bridge, whilst the PRS has a floating bridge. This allows the Custom 24 to have a tremolo arm which can be used to produce a unique vibrato effect.

Both guitars have a very different body and neck shape, which affects how they feel to play. The Telecaster has a single cutaway design, whereas the PRS has a double cutaway body which can make it easier to reach the higher frets.

The Tele usually has a deep C-shaped or U-shaped neck, meaning it’s quite wide. The PRS has a wide-thin neck shape, meaning it’s thin in terms of wrapping your hand around the back, but wide in terms of the fret-board face. Some guitarists prefer a thinner neck because it makes it faster to play on, whilst others prefer something a bit more substantial.

Again, both guitars look pretty different too. The Tele has a classic retro look that’s always been super popular. You get a variety of colour options, more of which are solid colours, with a plastic pick guard too. The PRS is a bit more modern looking and has the nice addition of bird fret inlays and a maple cap which gives it a unique look.

The Fender Telecaster and PRS Custom 24 have very different body shapes. The PRS has a double cutaway design, which makes it easier to reach the higher frets. Whereas, the Tele has a single cutaway.

In terms of body wood, you’ll get a mahogany body with the Custom 24, and usually an alder or ash body on the Fender Telecaster models. Mahogany contributes to a darker and warmer tone, whilst alder and ash add some brightness.

There are several key differences between the necks of the PRS and Fender Telecaster.

The first difference, is the profile. The deep-C or U-shape of the Fender Tele means it’s thicker than the PRS which has a wide-thin profile. Usually, thinner necks are described as faster, meaning it’s easier to move around the fretboard quickly. The PRS neck isn’t super thin though, it’s definitely not as thin as something like an Ibanez.

The next difference is in the tone wood. Fender models usually have a maple neck and either a rosewood or maple fretboard. Whereas, PRS Custom 24 guitars have a mahogany neck and rosewood fretboard.

There are also some other differences on the fretboard. The PRS has 24 frets with bird inlays and the Fender Tele has 22 frets and dot inlays.

Single-coils are well-known for producing crisp, twangy and bright tones. The main disadvantage of them, is that you can hear humming when you really crank up the gain. Humbuckers have a warmer and darker tone that doesn’t suffer from this humming issue. That’s why a lot of guitarists that play heavier music, prefer humbuckers. But those who play country and music with low gain, prefer single-coils. It’s all personal preference though.

The PRS humbucker pickups have a coil split function. This means you can produce single-coil type sounds by simply lifting up the tone control. It’s great if you want some extra versatility. However, the coil split humbuckers usually sound a bit weaker than traditional single coils. Check out our post on coil splitting to find out more.

With both guitars, you have a single tone and volume control and a three-way pickup selector to allow you to use the bridge pickup only, the neck pickup only, and both pickups in combination.

Check out this guide to pickups to learn more about the differences between the two types.

The final key difference in the anatomy of the two guitars, is in the bridge. The Fender Telecaster has a fixed bridge. This is great because it’s uncomplicated, has great tuning stability, and makes it easy to change the strings.

The PRS Custom 24 on the other hand, has a floating bridge. These are more difficult to setup, but have an important addition, the tremolo arm (also known as a whammy bar).  If you push down, or pull up on the trem, you can change the pitch of the strings, adding a unique effect to your playing.

We’ll start with the Custom 24. There are two main ranges, the SE line, and the USA core line. The SE (student edition) Custom 24 guitars, are the more affordable option. They are produced in Korea, and have all the main features of the PRS including the tremolo bridge, maple cap and bird-inlays. The USA-core line, is of course made in America and is the high-end option with better quality materials, and craftsmanship.

The Telecaster range is a little more complicated. Fender is the original manufacturer and produces the higher-range guitars. Another company, call Squier produce the entry-level and affordable guitars. Squier is still owned by Fender though so you will get the true essence of the Tele even if you go for the cheaper option.

With the Fender and Squier Tele ranges, you’ll get several different models. That’s where things get a bit more complicated. Here’s a quick rundown of the main lines.

Both the PRS Custom 24 and Fender Telecaster are great guitars for beginners. Although I would way the PRS is a bit easier to play, and has more versatility, I would recommend the Telecaster for a beginner.

This is because the entry-level guitars are much cheaper, so you don’t have to splash out on a premium model to get started playing guitar. The PRS SE line (the cheaper of the two PRS lines) is more intended as an intermediate guitar, so is a great idea if you’re looking to purchase a second guitar.

The PRS Custom 24 is a more versatile guitar compared to the Telecaster, as it has a coil-splitting function. This allows you to achieve classic humbucker tones, and also single-coil type sounds, hence it gives you more options in terms of the tones you can achieve, and the styles of music it suits. That’s not to say the Telecaster isn’t versatile though. Loads of pro guitarists have shown that it’s suitable for a range of styles, from country to metal.

Which is easiest to play?

The thinner neck and contoured double-cutaway body makes the PRS Custom 24 an easier guitar to play for most guitarists compared to the Telecaster. It’s generally comfier to sit and stand with, despite being a touch heavier. Make sure you check out both and try them in a store though as different guitars are easier to play than others for different people.

For hard rock and metal, I’d recommend the PRS Custom 24 over the Fender Telecaster. The PRS’ humbuckers mean it can handle high gain, and the mahogany body and neck, and the set-neck construction give it a resonant, darker and warmer sound. That’s not to say that you can’t play metal on the Telecaster. Take Tom Morello for example, he uses a Tele and doesn’t shy away from high gain amp settings.

The twangy, bright single-coil pickups make the Fender Telecaster a better guitar for country music than the PRS Custom 24 in most cases. The humbuckers are generally a bit too dark and mellow on the PRS to produce that sharp, clear tone required for country riffs.

Both the PRS Custom 24 and the Fender Telecaster are well suited for blues music. It really depends on if you prefer the meatier humbuckers on the PRS or brighter single-coils on the Telecaster. The coil-split function on the PRS can also be utilised in blues to give you a brighter tone, which is a useful addition. However, a lot of people recommend the Telecaster for blues style tones. So try playing both and see which tone sounds best to you.

So hopefully now you feel like an expert when it comes to the differences and similarities between the PRS Custom 24 and Telecaster. If you’re still torn between the two, then go and try them both at a guitar store and see which one you lean towards. Check out this ultimate guide to testing a guitar to make the most of your trip! 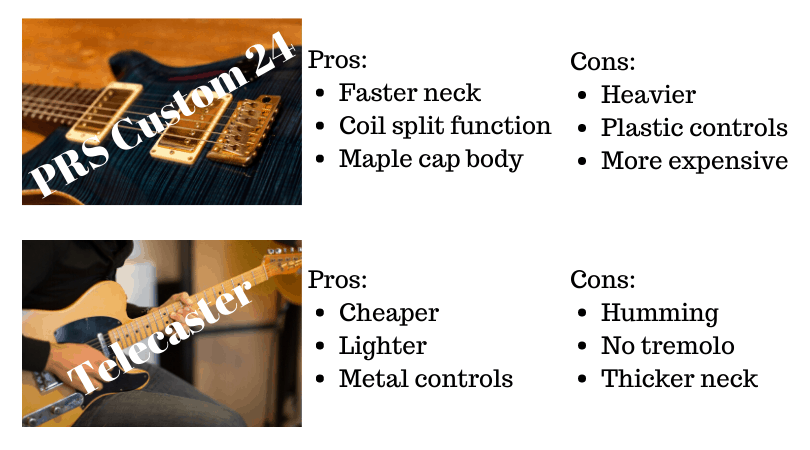 So there you go! There’s the in-depth comparison between the PRS Custom 24 and Fender Telecaster! I hope you’ve found this article helpful, thanks for reading. Here are some other posts you might find useful: