Skip to content
If you’re after a new electric guitar, then you’ll probably have heard a lot about the PRS Custom 24 and you’ll definitely have heard about the Fender Stratocaster. They’re both great guitars, but which is the best?
In this post I’ll go through all the similarities and differences between the two guitars so you can decide which is best for you. So let’s get started!

If you’re just interested in the specs, then check out the table below to compare all the key features between the standard versions of the Fender Stratocaster and PRS Custom 24 .

The PRS Custom 24 and the Fender Stratocaster are very different sounding guitars. The PRS has a darker and warmer tone due to the humbucker pickups and mahogany tone wood. The Strat has single coil pickups and an alder or ash body usually, so sounds brighter and twangier in comparison.

The PRS does have a coil split function which gives you single-coil type sounds too, however, they’re a bit thinner sounding than traditional single coil pickups.

Both guitars have a tremolo arm, which gives you the option to change the pitch of the strings by bending or pulling on the arm to produce a unique sound.

There are a few differences in the anatomy of the PRS Custom 24 and Fender Stratocaster that cause them to feel different to play, despite looking pretty similar at first glance. Both guitars have a double cutaway body which makes it easy to reach the high frets, however the Strat is more contoured and is lighter, meaning it’s a bit comfier to sit and stand with for long periods of time. The necks are both pretty standard so suit more players pretty well.

You’ll notice that both guitars have a double cutaway body, so can look pretty similar until you start to inspect them. The PRS looks a bit more modern and has some cool additions like a maple cap, and bird fret inlays. The Strat is more classic looking and has traditional dot inlays and more understated colour options.

Both the PRS Custom 25 and Fender Stratocaster have pretty similar looking body styles. The Strat is very iconic and has the classic shape, and the PRS is kind of a more modern version. Both guitars have a double cutaway body which is great for reaching higher frets. The Strat has a contoured body whereas the PRS has a flatter shaped back and curved front. The contouring on the Strat means it can be a bit more comfy to sit and stand with for longer periods of time.
The body woods of each guitar is a bit difference between the two. The PRS Custom 24 has a mahogany body with a maple cap, which gives it a darker and warmer tone than the Stratocaster which uses alder or ash bodies mainly.
Check out our post on electric guitar tone wood to learn more.

Both the Fender Stratocaster and the PRS Custom 24 have fairly slim necks meaning its quite easy to move around the fretboard and play faster. They aren’t as fast as something like an Ibanez though. The Strat has a standard C-shape neck and the PRS has a wide-thin neck profile. It’s thin to wrap your hand around the back, but wide in terms of the face of the fretboard.
You’ll get a different neck construction too. The Stratocaster uses mainly a bolt-on neck construction which is the cheapest kind, but great if you damage the neck of your guitar because its really easy to just unscrew it and replace the neck. The Custom 24 uses a seat-back construction which means the neck and body are glued into each other. This makes it harder to replace the neck if it gets damaged, but typically looks cleaner and offers a more resonant tone.
Take a look at our guide to guitar neck constructions to learn more about the differences.
You’ll also get pretty different fretboards with the two guitars. The PRS Custom 24 has 24 frets with unique bird inlays whilst the Strat has 22 frets with classic dot inlays. Usually the Strat uses maple or rosewood fretboards and the PRS Custom 24 uses a rosewood fretboard. You’ll also get a shorter scale length of 25″ on the PRS compared to 25.5″ on the Strat.

One of the biggest differences between the Strat and Custom 24, is in the pickups. The PRS has two humbucker pickups whereas the Strat has three single coils.
Single coils sound brighter and sharper than humbuckers and sometimes you get a humming noise if you crank up the gain. The humbuckers have a darker and warmer tone and don’t suffer from this humming issue. Hence, the PRS sounds more mellow and thicker than the Strat.
The PRS does have a coil split function though which allows you to change the sound of the humbuckers to sound more like single coils by lifting the tone control up. This makes the pickups pretty versatile. But don’t expect coil split humbuckers to sound as good as normal single coils.
Check out this guide to pickups to learn more about the differences between the two types.
Another thing to mention is that the Strat has an extra pickup between the bridge and neck pickups. This increases the possible tones you can achieve. With 3 pickups you can get 5 possible tones, but with 2 pickups you can only have pickup combinations.
Head over to our ultimate pickup configuration 101 to find out more about this topic.

Both the PRS and Fender Strat have floating bridges. This means that they have a tremolo arm which can be pushed down or pulled up to change the pitch of the strings. It’s a great effect that’s used by loads of pro guitarists.
However, each guitar uses a slightly different tremolo bridge. Traditional Strat bridges used a single locking system, which meant the tuning stability really suffered. More modern Strats use a double locking system which solves this issue. The PRS uses a double locking system to avoid the problem.
Floating bridges are great for giving you the vibrato effect, but they do have some issues, like making it harder to change the strings and to setup. Take a look at our guide to electric guitar bridges to learn more about the pros and cons of each type.

Next, we’ll move onto the different options and prices for each guitar. Starting with the Strat.

Fender is the original manufacturer and produces the higher-range guitars. Another company, call Squier produce the entry-level and affordable guitars. Squier is still owned by Fender though so you will get the true essence of the Strat even if you go for the cheaper option.

With the Fender and Squier Stratocaster ranges, you’ll get several different models. That’s where things get a bit more complicated. Here’s a quick rundown of the main lines.

The PRS Custom 24 ranges are more straightforward. There are two main lines, the SE line and the USA core line. The USA core line is more premium, whilst the SE (student edition) line is produced in Korea and is a more affordable option.

Both the PRS Custom 24 and the Stratocaster are great guitars for beginners because they’re versatile and easy to play. However, I’d say the Strat is the best option because it’s much cheaper. The entry level Squier Strats can be purchased for under $150, but the cheapest PRS SE Custom 24 is around $500. The PRS is a great guitar but it’s more geared for intermediate players or those looking for their second guitar.

The Stratocaster and PRS Custom 24 are very versatile guitars. The Strat has thre pickups, giving you more tone options, whilst the PRS has a coil split function to give you single-coil type sounds as well as humbucker tones. In my opinion, the PRS is a bit more versatile due to this coil splitting function, but there’s not much between the two. It depends whether you prefer a warmer or darker tone as to which you’ll prefer.

which is easier to play?

Both the Stratocaster and PRS Custom 24 have fairly standard sized necks making them easy and quick to play on. There’s not much between the two in terms of playability but I would probably say the Strat is slightly easier. This is because it’s a touch lighter than the PRS and has a contoured body which makes it really easy to sit and stand with for long periods of time.

Generally, the PRS Custom 24 is better for metal and hard rock than the Stratocaster. This is because the Strats single coil pickups can produce a humming sound when you crank the gain up. But the PRS uses humbuckers which allows you to produce a warm, beefy tone, without suffering from any humming issues.

The Stratocaster is the preferred guitar choice for country music compared to the PRS Custom 24. The Strat’s single coil pickups are bright and twangy, which suits this style of music best. The PRS’ humbuckers, even when in the coil split position, are a bit warm and mellow for this genre.

Both the Stratocaster and the PRS Custom 24 are great guitars for blues style music. It depends if you want to play with a snappier and brighter tone, if so choose the Strat. Or if you want a fuller and darker tone, if so, go for the PRS.

So hopefully now you feel like an expert when it comes to the differences and similarities between the PRS Custom 24 and Fender Stratocaster. If you’re still torn between the two, then go and try them both at a guitar store and see which one you lean towards. Check out this ultimate guide to testing a guitar to make the most of your trip! 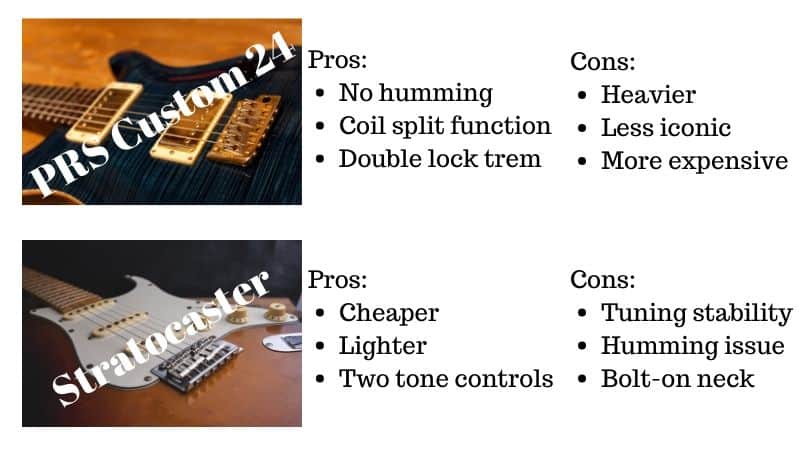 So there you go! There’s the in-depth comparison between the PRS Custom 24 and Fender Stratocaster! I hope you’ve found this article helpful, thanks for reading. Here are some other posts you might find useful: