Looking for a great beginners guitar, but not sure which is the best option to go for? The Les Paul and the Stratocaster are two of the most famous electric guitars of all time. They look and sound amazing, but how easy are they to actually play?

In this post I’ll go through an in-depth comparison between the two legendary guitar models, so you can decide which is the best option for you. So let’s get started!

A Stratocaster is generally better than a Les Paul for beginners. Strats have a thinner neck and lighter, contoured body meaning they are easier to sit and stand with. Both guitars are versatile, however Strats suit cleaner tones and Les Pauls suit beginners looking to play metal and hard rock.

If you’re just interested in the specs, then check out the table below to compare all the key features between the standard versions of the Fender Stratocaster and Gibson Les Paul .

Here are links to entry-level Stratocaster and Les Paul guitars so you can compare prices:

Which is Best for a Beginner?

Most beginner guitarists will find that the Stratocaster is an easier guitar to play than the Les Paul.

It’s lighter, and has a contoured body, compared to the heavy and flat-bodied Les Paul. This means that it’s generally more easier to sit and stand with. The neck is also usually thinner which means beginner guitarists will find it easier to hold frets and learn chord shapes.

But that doesn’t mean that the Les Paul isn’t a good choice for a newbie guitarist either. It really depends what kind of tone and look you want. So let’s go into the key differences between the Les Paul and Stratocaster.

The Les Paul and Stratocaster are very different sounding guitars.They almost act as opposites in the electric guitar world, due to several features like the pickups and tone wood, which create a completely different tone.

The Les Paul sounds much darker and warmer than the Strat. The Les Paul uses humbucker pickups, which are great for high gain, and have a mellow and beefy tone. The mahogany body and neck also contributes to this darker and richer sound.

The Strat on the other hand, uses single coil pickups and an alder or ash body. This gives it a much brighter and twangier sound. It’s great for clean tones, and low gain. However, if you really crank up the gain, you can start to get humming from the pickups.

The Strat and Les Paul have a very different feel to them. The Les Paul is heavier and has a thicker neck so feels much for substantial. The Strat on the other hand, has a thinner neck, and contoured body meaning it’s very comfortable to sit and stand with.

It terms of looks, you’ll also notice that the Strat and Les Paul are completely different. They are both very classic and iconic designs that look great. I personally don’t think that one looks better than the other, they just look different.

The main difference is that the Strat has a double cutaway body, and the Les Paul has a single cutaway design. The location of the pickup selector is also on the opposite side. The Les Paul uses trapezoid fret board inlays, whilst the Strat has dot inlays instead.

The Les Paul and the Strat have different shaped bodies, with the Strat having a double cutaway design and the Les Paul having just a single cutaway. This means it can be a bit easier to reach the higher frets on the Stratocaster, which some beginner guitarists will definitely prefer.

You also get a contoured body on the Strat compared to a thicker and flatter body on the Les Paul. The contours make the Stratocaster a bit easier to sit and stand with, especially combined with it’s lighter weight. The Les Paul has a mahogany body which contributes to it’s darker and warmer tone, compared to the Strat’s alder or ash body wood.

Take a look at this post on guitar tone woods to learn more about this topic.

The Les Paul and Strat also have different neck shapes and sizes. The profiles of each neck and also the size, varies between the different makes and models of both guitars, but as a general guide, the Les Paul has a thicker neck than the Strat. This can make it slightly more difficult for beginners to learn on, because they can find it harder to hold the frets, particularly if they have small hands!

You get a shorter scale length with the Les Paul compared to the Strat, this simply refers to the distance between the guitar’s bridge and the end of the fret board.

With both guitars, you get 22 frets. The Les Paul has trapezoid inlays, whilst the Strat uses dot inlays instead.

Generally, most Strats have a bolt-on neck construction, which refers to the way that the guitar’s neck and body are joined together. Bolt-on necks are cheaper, but produce a less resonant sound. The main advantage is that if you damage the neck, it’s really easy to unscrew it and replace it, which is great if you’re an accident prone newbie guitarist!

Check out this post on electric guitar neck constructions to learn more.

The biggest sound difference, in my opinion, between the Les Paul and Strat, is due to the pickups. The Strat uses three single coil pickups, which gives it a bright, crisp tone. It’s sharper sounding than the Les Paul’s humbucker pickups, which sound much warmer and darker. However, the single coil pickups on the Strat are prone to a humming noise, if you crank up the gain.

Check out this guide to pickups to learn more about the differences between the two types.

Another big difference, is that the Strat has three pickups, but the Les Paul only has two. This means there are less different possible sounds to create with the Les Paul compared to the Strat.

The Strat and the Les Paul also have different bridge types. The Les Paul has a fixed bridge, meaning that it’s only significant function, is to act as an end point for the strings on the guitar’s body. The Strat, on the other hand, has a floating bridge. This means you also get a tremolo arm incorporated into it.

When you push or pull on the tremolo arm, it allows you to change the pitch of the strings, adding a unique vibrato effect to your playing. You don’t get this feature with the Les Paul’s fixed bridge.

The main issue with floating bridges, is that they are more complicated to setup and change the strings, so beginners may prefer the more straightforward fixed bridge style on the Les Paul, unless they want this vibrato effect. Take a look at this post on the different bridge types to learn more about their pros and cons.

It’s worth noting though, that not all Strats have this floating bridge, and some just have a similar bridge to the Les Paul, which is uncomplicated and easy for beginners to maintain. Most entry level Stratocasters have this kind of fixed bridge, it’s only when you increase the price point, will you start seeing the floating bridge on certain models.

So most beginners buy Stratocasters produced by Squier, and most newbie Les Paul enthusiasts, buy models produced by Epiphone.

Here are links to entry-level Stratocaster and Les Paul guitars so you can compare prices:

Both the Les Paul and Stratocaster are versatile guitars, however they do have their limitations. The Les Paul is better for heavier genres like metal because the humbuckers can handle gain, and you get the two volume and two controls allowing you to switch between lead and rhythm tones by just flicking a switch. The Strat has three single coils pickups compared to the Les Paul which has only two humbuckers. This can give you a bit more versatility when it comes to the amount of sounds you can achieve on the Strat.

The Stratocaster and Les Paul can and have, been used for metal and hard rock, by a number of professional guitarists. However, in my opionion, the Les Paul is better suited to these heavier genres. This is due to it’s darker and warmer tone caused by the mahogany tone woods, and the humbucker pickups that cope better with gain than the single coil pickups on the Stratocaster.

The Stratocaster is generally the better choice of electric guitar than the Les Paul for country style music. The Strat has a brighter and twangier tone due to it’s single coil pickups, which really suit country riffs. The Les Paul’s humbuckers are generally a bit too mellow and warm for this style of music.

Both the Stratocaster and Les Paul are well suited to blues. Some guitarists, prefer the warmer and darker Les Paul humbuckers for blues, but others prefer their tone to have a brighter element, so will lean towards the Strat’s single coil pickups. It really depends whether you want your tone to be mellow, or bright.

So hopefully now you feel like an expert when it comes to the differences and similarities between the Les Paul and Stratocaster. If you’re still torn between the two, then go and try them both at a guitar store and see which one you lean towards. Check out this ultimate guide to testing a guitar to make the most of your trip! 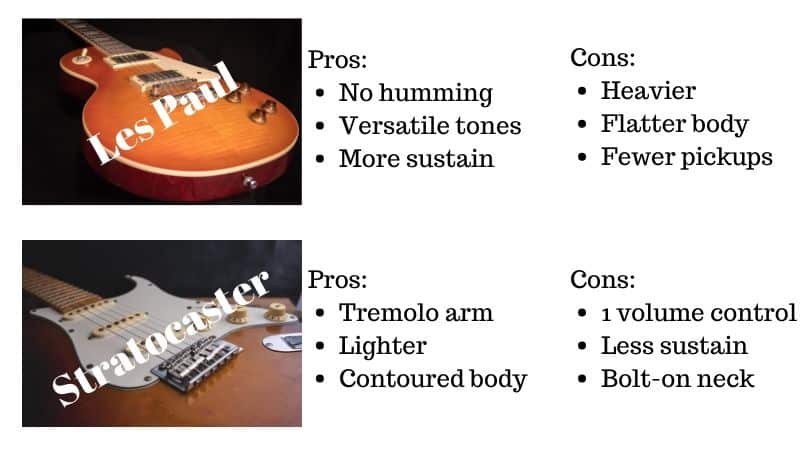 So there you go! There’s the in-depth comparison between the Les Paul and Stratocaster! I hope you’ve found this article helpful, thanks for reading. Here are some other posts you might find useful: