Electric guitar weight can affect the tone, and how easy a guitar is to play. Here is a complete guide to the average weights of electric guitars and why it matters.

One of the lightest models is the Gibson SG, weighing 6 pounds (2.7 kg), and one of the heaviest is the Les Paul which weighs up to 12 pounds (4 kg).

So there’s quite a bit of variation in weight between electric guitar models. For example, the Gibson Les Paul weighs over 9 pounds (4.5 kg) whilst the Gibson SG weights just 6 pounds (3.6 kg). How come two guitars from the same brand vary so much in weight.

There are several main factors that affect the weight of a guitar: 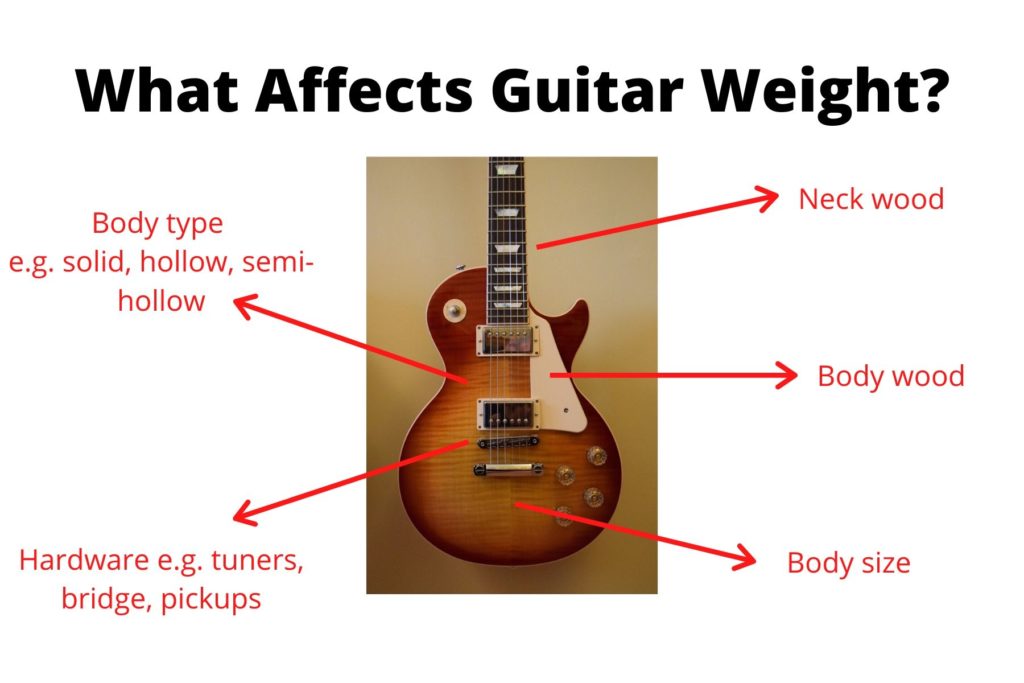 First let’s start with the type of wood that the guitar is made from. Most electric guitars bodies are made from ash, alder, basswood, mahogany or maple.

If you’re looking for a lightweight guitar, then you’ll usually find that the body is made out of basswood, alder or ash. Mahogany is a heavier wood, you’ll find this on Les Paul’s. Whilst maple is the heaviest, an ES-335 is a good example of a maple-bodied guitar.

It’s also important to remember the neck wood too. Most guitar necks are made from either mahogany or maple. Again, maple necks are the heavier of the two, but mahogany is by no means a light wood.

Okay, so why are some guitars super light, yet they have a maple body? Well, this comes down to the body size and type.

First let’s start with body type. There are three main electric guitar types: hollow, semi-hollow and solid. Hollow guitars are most closely related to acoustics, however instead of a sound hole, they still have pickups. They typically are quite large, but the inside is hollow, so they don’t weight all that much.

Solid bodies are the heaviest  of the three types, because they are obviously a lot denser.

In terms of body size, some guitars are much thicker than others, or have wider bodies. Take the Les Paul and SG for example. They both have mahogany bodies, and two humbucker pickups, yet the Les Paul weights half as much again as the SG.

This is due to the body design. The Les Paul has a single cutaway body, whereas the SG has a double cutaway design, so there’s more wood adding weight to the Les Paul.

The LP also has a much thicker body compared to the SG. The Les Paul’s body is around 2.5″ thick, whereas the SG is only around 1.5″ thick. This adds a lot more weight to the LP.

This is not the most important factor in determining how heavy an electric guitar is, but it can make a bit of a difference, but usually less than half a pound or so.

When we’re talking about hardware, we can group in the pickups, bridge and controls. The tuners can also make a bit of a difference here too. For example, Locking tuners are usually 0.5-1.0 ounces (15-30 grams) heavier than traditional tuners.

So why does weight actually matter? Well, one of the main things that weight can affect, is the tone of the electric guitar.

Heavier guitars are usually heavier because they are made from thicker pieces of wood. This tends to give you a more resonant tone, with better sustain, because the vibrations caused by the strings take longer to disperse. Heavier guitars tend to have a fuller and warmer tone for this reason.

You’ll also remember that solid body guitars are heavier than semi-hollow and hollow guitars. This again impacts the tone.

Solid body guitars have better sustain and less feedback than hollow designs. Hollow and semi-hollow guitars tend to suffer from feedback when you crank up the distortion or volume on your amp, due to the space behind the pickups.

They do tend to sound warmer and more bassy than solid guitars, as they are more related to acoustic guitars.

Take a look at this article I’ve written about the differences between semi-hollow and hollow body guitars to learn more about this topic.

Why Else Does Weight Matter?

This is particularly important if you play stood up. If you have a fairly small frame, and you choose a 12 pound Les Paul, you may start to struggle after a while, when your shoulders start to ache.

It can also be an issue when you’re sat down and the guitar is resting on your leg.

So, lighter guitars are usually a better option if you’re concerned about playability. It’s really important to try a guitar out in the store to check that it feels comfortable after a while of sitting and standing.

After all, you can do a lot to change the tone of the guitar by using different amp settings or effects pedals, but there isn’t much you can do to make a guitar lighter.

Let's Take a Look at Some Examples...

So we touched on the different weights of different models of electric guitars at the start of the article, but now let’s jump into a more detailed explanation. I’ll go through the main models, and explain why they weight so much (or so little) and what this means for playability and tone.

Let’s go from heaviest to lightest, starting with the Gibson SG.

The Gibson SG weighs 6 pounds (2.7 kg) on average, making it one of the lightest electric guitars available.

So why is it such a lightweight?

Well, first of all, it has a very thin body. The width of an SG’s mahogany body is a touch under 1.5 inches. This is super thin. It also has a fairly short scale length of 24.75 inches, so it generally is a pretty small electric guitar.

The Squier Telecaster weighs 6.5 pounds (2.9 kg) on average, making it a light-weight guitar.

The main reason for this, is the tone wood. Most Squier Tele’s are made out of either alder or ash, and the cheaper models are made of basswood, which is very light.

The scale length is longer than the SG, at 25.5″, so it’s a bit larger, however, the single coil pickups are fairly dainty bridge keep it pretty lightweight.

It is lightweight because it has a contoured double cutaway body, so there isn’t much that adds to the weight of this guitar.

Ibanez guitars are pretty light, and this RG series is no different, weighing in at 7 pounds (3.2 kg). This is primarily due to the slim body, and also the super thin neck.

The RG series has a pretty large scale length of 26.5 inches, which makes it a touch heavier than you’d expect for a normal double cutaway, slim body.

The Fender Stratocaster weights 8 pounds (3.6 kg) on average. This is the standard weight for most electric guitars.

Strats have a fairly lightweight body due to the alder/ ash tone wood, double cutaway design and contoured shape. What makes them a touch heavier than you’d expect, is the maple neck and fretboard.

The Fender Telecaster weights 8 pounds (3.6 kg) on average. It’s a fairly moderately sized electric guitar, with a light body (made of alder/ ash) and heavier neck (made of maple), giving it a pretty balanced weight.

The hardware is pretty lightweight, as the single coil pickup and bridge design aren’t too heavy.

The Gibson Flying V weight around 8 pounds (3.6 kg) on average.

Although the body isn’t too large, it is a touch thicker than the SG, at just over 1.5 inches. It does have a pretty thick rounded C-shape neck though, which definitely adds to the weight.

The Fender Jazzmaster weighs approximately 8.5 pounds (3.9 kg), so slightly more than a Strat or Tele. It has a thicker body than the Strat, and a heavier bridge.

The PRS Custom 24 weights roughly 9 pounds (4.1 kg). This is due to the mahogany body and neck, and also the dual humbucker pickups and tremolo bridge. You also get a maple cap on the body, making it heavier still.

This is due the the thick mahogany body, which is around 2.5 inches wide. The single cutaway design also adds some weight, in addition to the thick rounded neck and large headstock.

So there you go! That’s how much the average guitar weighs! I hope you’ve found this article helpful, thanks for reading. Here are some other posts you might find useful: