If you’ve ever noticed a crack in your guitar, then you’ll know it’s a pretty terrible feeling. Unless you’re going for the distressed look, it can damage the appearance of your otherwise flawless looking guitar. But more importantly, you’re probably wondering if it will actually affect the tone?

In this guide, I’ll go through how exactly a crack in your guitar, can affect its tone, and whether it’s a big deal, or nothing to worry about.

Whether a crack affects the sound of a guitar or not, depends on a few different things including:

How do Guitars Produce their Sound?

Before jumping in to exactly how a crack affects the sound of a guitar, it’s important to know how guitars actually produce their sound to understand this properly. If you’re well clued up on the physics of guitars, then feel free to skip ahead to the next section!

So everyone knows that a guitars sound is produced when a string is plucked, and that the vibrations result in the sound you ultimately hear. But how exactly does this happen?

These string vibrations produce sound differently, depending on whether you have an acoustic or electric guitar.

With acoustic guitars, the body of the instrument is most important in amplifying the sound from the string being plucked. The vibrations are first transmitted to the saddle, followed by the soundboard. The soundhole then releases the sound that you hear.

With electric guitars, the string vibrations are received by the pickups. They then transmit this to the amplifier which plays the sound via the speakers. 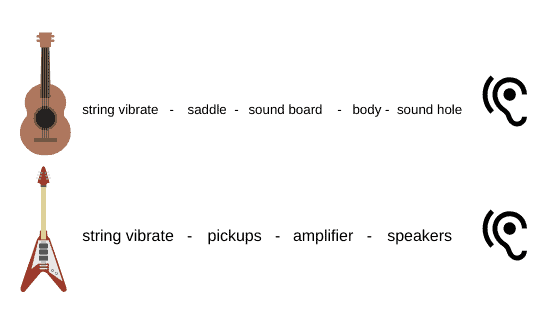 How do Cracks Affect the Sound?

Now you know exactly how a guitar produces its sound, we can move onto the impact of cracks.

Cracks have far more of an impact on the sound of an acoustic guitar than an electric guitar.

Hence, when there is a crack in an acoustic guitar, this will affect the way that the sound is transmitted. So what’s the impact?

Well usually, cracks will result in less sustain (how long a note can be heard), and less resonance. These are two factors which are really important in creating a good tone.

Cracks still can impact the tone of an electric guitar, but it’s not as big of an issue.

Next, we’ll move on to the factors that affect how much a crack impacts the sound of a guitar, these are the location and also the depth of the crack.

The impact a crack in your guitar has on the tone produced, depends heavily on the location.

Top of the Body (Soundboard)

These tend to happen less than cracks in the side or back of a guitar. This is because, if you drop a guitar on its front, the bridge is more likely to take the brunt of the fall. However, they can still happen. More commonly, cracks in the top of a guitar are caused by it drying out. It can lead to seam separation. These cracks usually result in less resonance when it comes to the tone.

Back of the Body

Sides of the Body

This is quite a common place for a crack to appear. It usually happens if the guitar is dropped or transported improperly, for example when being shipped to the buyer. They’re less of a concern for the aesthetics than the top of a guitar. Cracks in the sides of a guitar usually make the tone sound a bit thinner than if undamaged.

The impact of cracks in the neck of a guitar usually depends heavily on their severity. Of course, some neck cracks can be so bad that the guitar is completely unplayable until you replace the entire neck. Hairline cracks in the back of the neck usually have much less of an impact on the sound of the guitar than cracks in the body.

How Severe Is It?

It’s no surprise that the depth and length of a crack in a guitar will massively affect how much the tone suffers. The more severe the crack, the less sustain that you’ll get.

Hairline cracks are the best kind to get in your guitar. They’re usually the easiest to fix, and have the least impact on the tone. Depending on where they’re located, you may not even notice any impact on the sound quality at all. However, if you notice one, you should get it fixed as soon as possible, otherwise it can spread and get larger. Then it’s much harder to fix and will have a more significant impact on the tone.

If the crack is a few centimeters, then this is a critical point. It’ll probably be just about the point where you may start noticing subtle impacts on the tonal quality. It’s also the point at which it’s not too hard to fix. But if you leave it any longer than you could end up with a much more significant issue.

A Few Inches or Very Deep

If the crack in your guitar is over an inch long, or it goes the entire way through the guitar’s wood, then you’ll most likely notice a significant impact on the sustain of your tone. Severe cracks are much harder to fix, but not always impossible. The best thing you can do is spot a crack early, and prevent it getting to this point though.

How to Prevent it Getting Worse

If you’ve noticed a hairline crack in your guitar, then the most important thing to do, is stop it getting any bigger. At the moment it’s unlikely to have any dramatic impact on the tone of your instrument, but it could in the future if you let it grow any more. Here are some quick tips to prevent the crack getting worse before you get chance to fix it.

How to Repair It

Now you know exactly how cracks impact the sound of a guitar, you’re probably wondering how they can be repaired. There are several steps you should take to do this.

However, it’s worth noting that you should feel confident in your ability to fix cracks before attempting it. You can run the risks of making it worse if you don’t know what you’re doing. If you don’t feel as confident, then the best thing you can do is take your guitar to a luthier to properly assess the damage and fix it for you.

With that in mind, here are the main steps to fixing a crack in your guitar.

Those are the basic steps to repairing minor scratches. Other repairs require more specialist equipment like clamps or humidifiers. This will often be the case for deeper and longer scratches, or ones that won’t close up properly. It’s best to take your guitar to a specialist if this is the case, rather than attempting anything at home!

So there you go! That’s exactly how cracks in a guitar affect the sound! I hope you’ve found this article helpful, thanks for reading. Here are some other posts you might find useful: