There has long been a bit debate surrounding the question, does it matter where a guitar is manufactured? Here I’ll go through everything you need to consider, and get to the bottom of whether it actually matters, or if it’s just a myth.

First, we’ll go through the main countries that make guitars. Then we’ll jump into the three variables that affect how well each country makes their guitars. These are the material quality, crafstmanship and also the quality control process. Then I’ll give my take on the age old question, are American-made guitars really better than the rest? So let’s get started!

There are several countries that are well-known for producing both electric and acoustic guitars. Here’s a quick rundown of the main countries and regions.

Generally, America made guitars are considered of the highest quality. Korea and Japan are also well-recognised for producing a lot of mid-high range guitars. Mexico, Indonesia and China tend to produce more affordable guitars.

Most people agree that America produce some of, if not the best guitars available. They’ve been manufacturing guitars for decades and the USA is the home of some of the most famous guitars brands including Fender, Gibson and PRS.

China and central Asia produce mainly lower-end guitars in large factories. The quality has often been doubted, but has definitely increased over the last decade or so. Epiphone produce a lot of their guitars in China, so it’s a good place to look for if you don’t want a guitar with a premium price tag.

The most well-known manufacture that uses factories in Mexico, is Fender. They generally produce the low-end guitars in the Fender range such as the Player series. The quality isn’t as good as you’d find with an American-made guitar, but is usually better than China and Indonesia.

Similar to China, Indonesia produce mostly affordable guitar models. The most notable brand that uses factories in Indonesia, is Jackson. This is a low-mid range guitar brand that is popular with hard rock and heavy metal music guitarists.

Korea are well known for producing some excellent quality guitars. Their guitars tend to be a step up in quality from those produced in Mexico, Indonesia and China. Korean factories are most notably associated with producing some of PRS’ entry level guitars like the SE line.

Japan, like Korea, are well-known for producing really great guitars. Ibanez and Yamaha use Japanese factories to produce some of their electric guitars. You’ll often see that mid-high quality guitars are produced from Japan.

Germany are well-known for having well-trained and highly skilled luthiers. It’s a lesser known country for producing guitars than Japan and the USA, however they have produced some very high quality instruments over the years. Höfner is probably the most notable brand that produces its guitars in German. Höfner famously produced a lot of The Beatles’ instruments.

The UK is more famously associated with producing high quality amplifiers like Orange and Vox, however they have also produced a lot of high quality guitars too. Patrick Eggle guitars were UK-made and were been used by Queen’s Brian May. Currently, Gordon Smith guitars are produced in the UK and are well-renowned for making great instruments. 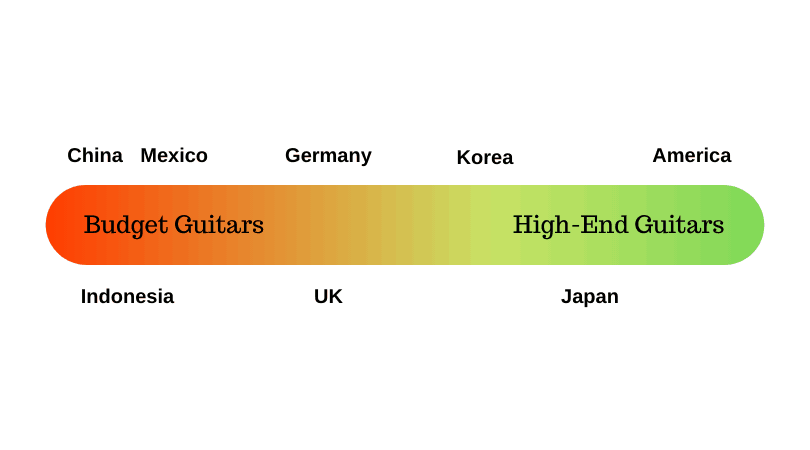 Why Do Some Countries Produce Better Guitars?

There are usually three factors involved in the answer to this question. Some countries produce better guitars due to the following:

One of the biggest factors affecting the quality of a guitar, is the quality of the craftsmanship that goes into manufacturing it. The most expensive guitars are often produced by the most experienced luthiers.

There are several countries associated with having the most highly skilled luthiers. These include the USA, Japan and also some European countries. This tends to be why guitars from these regions are considered of a higher quality. Other regions which don’t place as much emphasis on training luthiers, and instead mass-produce guitars in factories, tend to make lower quality instruments.

Of course, buying a guitar from America doesn’t mean that a more skilled luthier made it, than if you purchased one from elsewhere. There are experienced and highly skilled luthiers all over the world. So don’t use this as a rule.

Similar to craftsmanship, quality control is also super important. This follows the same trend as we just discussed. Countries which mass-produce guitars, tend to have a less stringent quality control procedure. This is because the focus is more on producing a lot of guitars in a short space of time. Having more quality control checks means that the manafacturing and shipping process is delayed, so in order to maximise output, less guitars are checked.

Now this doesn’t always mean that you’ll get a lower quality instrument if you purchase a guitar made in a large factory. It just means that if there was an issue in the manufacturing process, then it’s less likely to get picked up on. So there’s more chance that your guitar could have some flaws or defects.

More expensive guitars on the other hand, for example those produced in custom-shops in the USA, as extensively checked prior to being shipped. When you pay more for a guitar produced in this way, it’s far less likely to have any defects, hence you’re more likely to get a better quality instrument.

The quality of the materials used to manufacture a guitar, will also vary depending on which region it is produced in. However, this is more of secondary effect.

More expensive guitars, for example, those produced in America, are made from the highest quality materials. Whereas, Chinese-made guitars are often lower-end models, so produced using cheaper materials. Hence, it tends to be that some countries produce cheaper guitars, and they use cheaper materials, rather than the quality of the materials being lower in certain countries.

Are American Made Guitars Better?

So this leads to the final question, are American made guitars actually better than those produced elsewhere?

Generally, the USA has the best reputation for producing the highest quality guitars. This is because America is the home of the most premium brands, like Fender and Gibson, and it’s where they produce their custom-shop guitars, the best ones available. They tend to have the best quality control procedures, and also use exceptional quality materials. However, this also means that they are more expensive than guitars produced in other countries.

So there you go! That’s the answer to the big debate, does it matter where a guitar is manufactured! I hope you’ve found this article helpful, thanks for reading. Here are some other posts you might find useful:

The J-Bass and the StingRay are two of the most popular bass guitar models available today, but which is the right one for you? In this article I'll be comparing these two basses head-to-head so you...

Whether you're using a Gibson or Epiphone Les Paul, you'll want to get the most out of it by pairing it with a great amplifier. But which combination is the best? In this article I'll take you...