Pickups are one of the most important aspects of your guitar, when it comes to determining how it sounds. There are loads of different types, makes and models, that it can be hard to decide what’s actually best for you.

One of the biggest questions that gets asked about pickups, is about the difference between coil split humbuckers and P90’s.

In this article, I’ll address how these types of pickups are different, how they sound and the pros and cons of each. So let’s get started!

Coil split humbuckers allow you to have the warm and full tone of a humbucker, and the bright tone of a single coil, within the same pickup, by simply lifting your tone control up, or pushing it down. P90 pickups sound like a cross between humbuckers and single coils, so have a more balanced tone.

Pickups consist of magnets wrapped in coils of wire. This structure is mounted onto a bobbin, and then covered in metal or plastic.

There are three main pickup types: single coils, P90’s and humbuckers. Single coils sound bright and twangy, but also quite thin and have some feedback issues. They are named because they consist of just one set of coils.

Humbuckers on the other hand, sound darker, warmer and fuller, and have less feedback issues. This is because they have two sets of coils, running in opposite directions which cancels the feedback out. 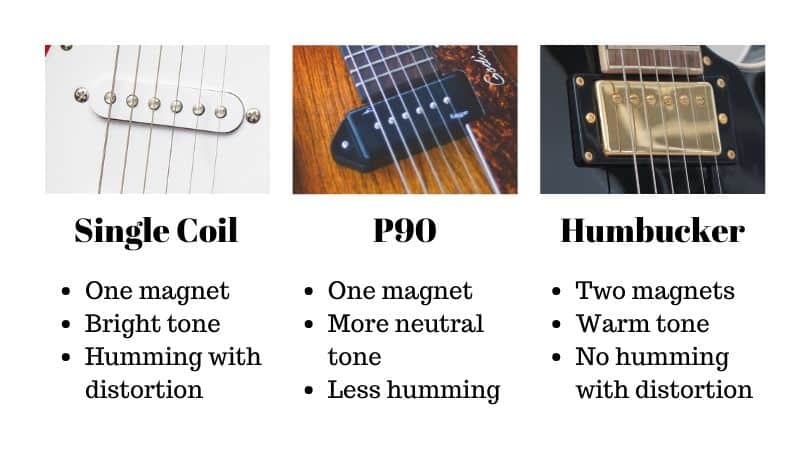 Okay, so what is coil splitting then?

This is a feature that some humbucker pickups have, which allows them to sound like a single coil.

Coil splitting works by taking one of the humbuckers two coils, and shutting it off. It’s really easy to switch between the humbucker sound and coil split sound if your guitar has this feature.

You’ll simply need to pull the tone control up, and it’ll click into position. In this “up” position, the coils are split, and the tone will be brighter and thinner. In the”down” position, the humbucker acts as normal, and sounds warm and full.

What are P90 Pickups?

Okay, so we’ve already touched on this topic a bit, but let’s go through it in a bit more detail.

P90 pickups have a single coil structure, but they have a wider bobbin. This causes them to look wider than standard single coil pickups.

They don’t sound as full and warm as humbuckers though. And you can still get some feedback issues with them, although not usually as much as you do with single coils.

They’re well suited to a range of different styles of music, so they’re pretty versatile. They are primarily used for blues, country and rock though. You won’t usually see them on guitars used for heavy metal though, as they don’t have a very strong bass response, and the feedback can become a problem with high distortion.

P90 pickups are popular with lead guitarists who want a brighter tone than humbuckers give them, but don’t want something quite as warm sounding. P90’s allow them to cut through the sound of the rest of the guitar.

If you’re interested in learning more about this topic, check out my in-depth guide to P90 pickups to answer all your questions.

Comparing the Two: Pros and Cons

So now you know a bit more about coil split humbuckers, and P90 pickups, you’re probably wondering which is the best option.

Here are some key points to consider:

So if you’re struggling to decide between coil split humbuckers and P90’s, then you need to consider the following questions.

In my opinion, you should treat the coil splitting function as a bonus. The sound isn’t as good as it is with proper single coils, or P90’s in the coil split position. But it’s a great feature to have.

So unless you enjoy the tone of a traditional humbucker more than a P90, don’t just go for a coil split humbucker, as a compromise. You’ll probably be happier with a P90 tone instead.

Check out my article comparing P90 and humbucker pickups to learn more.

So there you go! That’s the difference between coil split humbucker and P90 pickups! I hope you’ve found this article helpful, thanks for reading. Here are some other posts you might find useful: