Les Paul’s and Telecasters are two of the most iconic electric guitars of all time. They both sound and look great, but they’re completely different in a lot of ways. So what do you do if you have a Telecaster and you want to get that darker and deeper Les Paul tone?

In this article I’ll go through why these guitars sound so different, and how to make your Tele sound more like a Les Paul in just a few easy steps. So let’s get started.

You can make a Telecaster sound more like a Les Paul, to a certain extent, by increasing the sustain, reducing the treble frequencies and eliminating the background noise associated with Tele’s.

This can be done by adjusting your amp settings, using an EQ pedal, switching to the neck pickup, and using a noise gate pedal. However, you won’t be able to completely recreate the Les Paul tone  using a Telecaster. 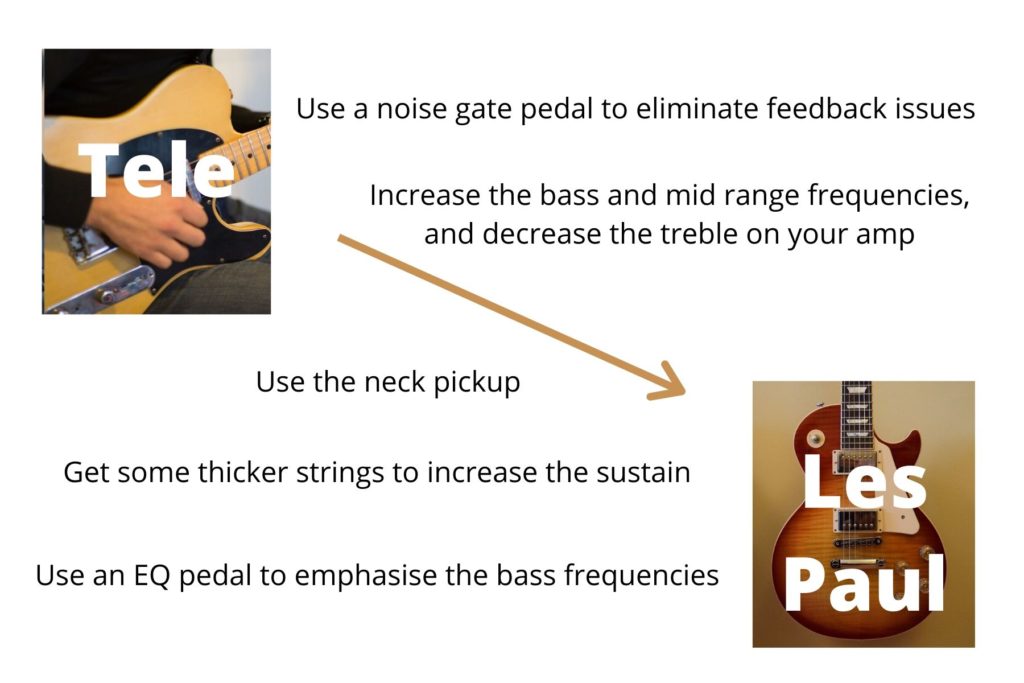 Why Do Tele's and Les Paul's Sound Different?

So to understand how you can make a Tele sound more like a Les Paul, it’s a good idea to actually understand what makes them sound so different.

Telecasters are well known for their bright and twangy kind of tone. This is primarily due to the alder body, maple neck and single coil pickups. The main issue with Tele’s, is that the tone sometimes can sound a bit on the thin side.

This is because the Telecaster tends to emphasise treble frequencies, compared to bass frequencies, giving it a clear, but thin tone. The single coil pickups are also prone to background noise, and humming, particularly when you crank up the distortion or volume on your amplifier.

Les Paul’s, on the other hand, sound a lot darker and thicker. This is because they have a mahogany body, which tends to resonant sound better and give you more sustain, and because it has two humbucker pickups.

This means the tone is a lot more full, and heavier, which is perfect for rock and metal. The humbuckers also produce far less background noise when you increase the gain on your amp.

If you’re interested in learning more about how the pickups and tone wood affects a guitar’s tone, then take a look at these two articles.

An often overlooked aspect of the two guitars which contributes to the difference in tone, is the scale length. This simply means the length between the bridge, and the start of the headstock.

The longer the scale length, the sharper and crisper the tone is. Shorter scale lengths result in a thicker and warmer tone. 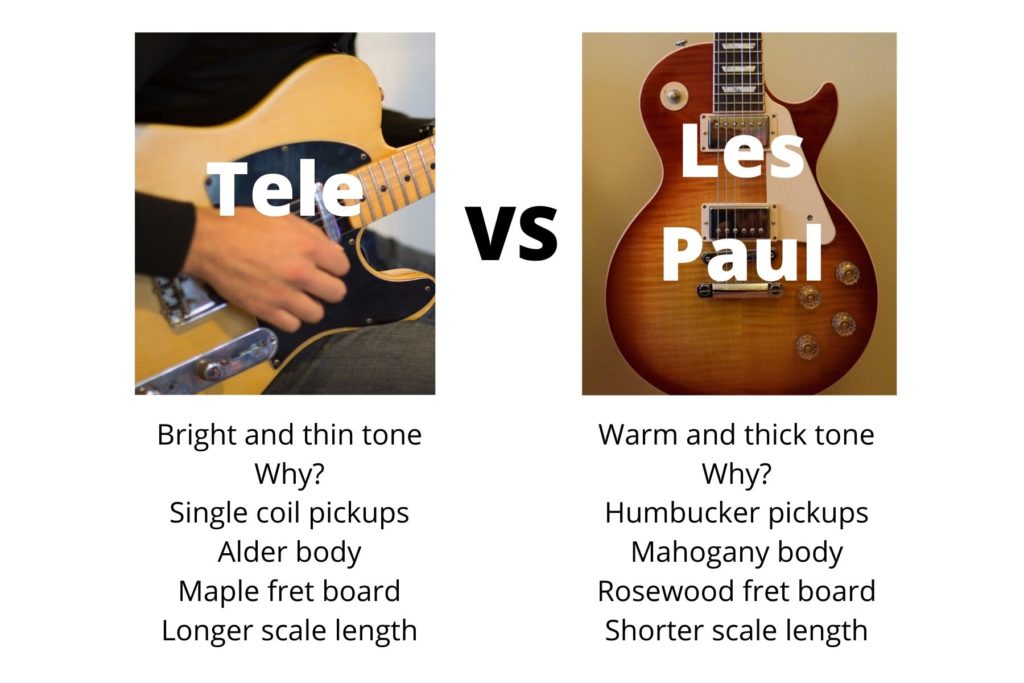 Can you Make a Tele Sound Like a Les Paul?

Okay, so if Tele’s and Les Paul’s sound so different to begin with, is it ever possible to make one sound like the other?

You can make a Telecaster sound more like a Les Paul, to some extent. It’s not possible to completely recreate a Les Paul’s tone with a Tele, but you can do several things to make your Tele sound thicker, warmer and fuller.

How to Make a Tele Sound Like a Les Paul

So, with all that said, how do you actually go about making your Telecaster sound like a Les Paul?

There are three main things you need to focus on.

Okay, so let’s go through each aspect individually, with examples on how to make these changes to your Tele’s tone.

One of the main differences between the tone of a Telecaster and Les Paul, is in the brightness. This is caused by the emphasis on the treble frequencies.

So how do we address this to make it sound warmer?

There are several things you can try here:

If you’re into guitar effects pedals, then you may already have an EQ pedal in your collection. But if not, then it may be worth considering them.

Placing more emphasis on the bass frequencies, and knocking back the treble, will make your tone warmer, so it sounds more like a Les Paul.

use the neck pickup

So try using the neck pickup instead of the bridge to give you a warmer-Les Paul style tone.

Rolling back the tone and volume controls will also do the same. This will help knock back some of the treble, giving you a warmer tone.

Finally, you can look at your amp as well. If you

If your amp has individual settings for treble, bass and mids, then you’ll want to dial back the treble, and give your bass an increase This will help make your tone more mellow and less sharp and harsh sounding.

Other amps don’t have individual bass, mids and treble controls, instead they have an EQ or tone control. Turning these controls counter-clockwise will have the same effect as I described above.

If you’re using a Marshall amp, then reduce the presence control to again knock back some of the treble.

2. Thickening Out The Tone

The next thing you’ll need to do, is make your tone sound thicker and fuller.

Tele’s are well known for having a fairly thin tone, particularly in comparison to Les Paul’s. So here’s how to address this issue.

In order to make your guitar’s tone sound thicker, you’ll need to increase the sustain, and enhance the mids and bass frequencies. This will give you a fuller tone, that sounds a lot more like a Les Paul.

In order to increase the mid-range frequencies, you should give your mids setting a boost, if your amp has specific controls for bass, mids and treble.

Some amps have a contour control as well. This basically works as the opposite to the mids settings. So if you increase the contour, then you’ll be decreasing the mids.

So if your amp has a contour control, then you’ll want to keep this quite lot to thicken out your tone.

Take a look at this complete step-by-step guide to amp settings if you’re struggling to dial in the best tone.

Use a Compression Pedal

Compression pedals have been around for a long time now, and they can be found on pretty much every pro guitarist’s pedal board. They do a lot to make your tone sound more smooth and polished, but they are also great for thickening it up a bit.

If you want to learn more about compression, then check out this complete guide to compressor pedals to find out how they’re improve your guitar’s sound.

get some thicker strings

Another really effective way to thicken out your Tele’s sound, is to increase the thickness of the strings you’re using.

Changing your strings doesn’t take much time to do on your own if you know how. And if you don’t then it should only take the store a couple of hours to get your guitar back to you.

So what gauge should you go for? Well you choose pretty much anything between 0.008 and 0.015 gauge strings. This refers to the top E string. Generally, you purchase strings in a set, so the gauge described refers to this top E string for consistency.

If you’re using a 0.009 set, then consider upping this to 0.010 and see what difference it makes. You can always go higher, but you may find it a bit more difficult at first to get used to.

Check out these 9 ways to increase the sustain on your guitar if you’re looking for some more cheap and easy ways to make your Tele sound fuller like a Les Paul.

Okay, so now let’s move onto how to solve one of the biggest issues that prevents a Telecaster sounding like a Les Paul, and that’s the background noise.

This is due to a Telecaster’s single coil pickups, which are prone to feedback and humming, particularly at high volume or distortion levels.

The best way to do this, is by using a noise gate pedal. They do at the beginning of your guitar pedal chain (closest to your guitar, furthest from your amp), and they basically remove any unwanted humming, buzzing and feedback before it goes into your amplifier.

If you’re new to pedals and you want to learn more about how they can improve your tone, then check out this post all about setting up effects pedals.

If you want a more permanent solution, and don’t mind modifying your Telecaster, then you can also look at swapping out the pickups. You can either swap them for humbuckers, or use some different single coils.

Here are a few great options to try if you want some single coils that don’t suffer from feedback as much as stock pickups.

These pickups are well known for sounding warmer and louder than traditional single coils. Although they don’t sound like humbuckers, they are about as close as you can get with a single coil pickup. They also have hum-cancelling, which allows you to increase the gain, without annoying feedback and background noise. Check out these DiMarzio DP422 pickups on Guitar Center.

EMG are specialists in designing pickups that are best suited for producing powerful sounds for metal music. These pickups are some of the only active single coils out there. This means you’ll get a boosted mid-range, plus a higher output so an increase in sustain. Check out the EMG SA pickups on Guitar Center.

So there you go! That’s how to make a Telecaster sound like a Les Paul! I hope you’ve found this article helpful, thanks for reading. Here are some other posts you might find useful: